More and more Google applications that used to be available only for Android are now ported to the iPhone. After Google Voice, Google Latitude, Google Places, Google Goggles (a feature of the Google Mobile App), iPhone users can now download Google Shopper, a product search tool that recognizes barcodes, supports voice search and lets you compare prices at online stores and local stores. It’s actually a mobile version of Google Product Search that knows your location and has more input methods.

Google Shopper saves your history and lets you star products, but it doesn’t integrate with Google accounts, so your data is only available on a single device. Another issue is that voice search times out too fast, so it’s quite difficult too use.

According to Google, “Shopper is available for iPhone 3GS and iPhone 4 with iOS 4.0+ in English only for the United States and the UK.” 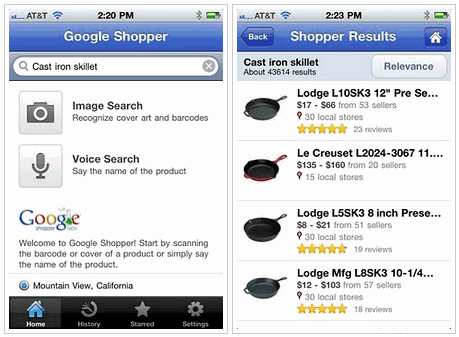 There are still many Android-only apps (Sky Map, Google Translate, Gmail, Google Talk, Google Reader, Google Maps Navigation, Google Finance, Gesture Search) and it’s likely that some of them will be available in Apple’s App Store in the coming months.

6 hours ago
Uber for Business launches Eats in new markets

6 hours ago
Uber for Business launches Eats in new markets