It was a vote of confidence when Howard Schultz joined the Groupon board of directors — and it’s a sign of the start-up’s significant financial challenges that the Starbucks CEO is leaving before his term is up to make way for American Express CFO Daniel Henry.

A second director, Accel Partners’ Kevin Efrusy, won’t stand for re-election at the company’s Jun 19 board meeting. As the board rep from a key investor, usually someone like Efrusy would be replaced by another member of his firm. Instead, his slotted successor is Robert Bass, a vice chairman of Deloitte LLP, now nominated for election at the annual meeting. (The changes were reported first by AllThingsD, then confirmed by Groupon.)

But Groupon’s lightning-rod-in-chief –CEO Andrew Mason — isn’t going anywhere. Yet. Mason, the co-founder and one of the largest individual Groupon shareholders, has been criticized for his eccentric management style, which could be forgiven or at least overlooked when he was delivering results.

Investors get a lot less forgiving when growth is in question and you have to restate your first public quarter’s results, especially if accounting methods aren’t the norm. Groupon is being sued by shareholders and may face an SEC investigation .

Howard Schultz is no financial slouch but he’s not a finance guy. Replacing him with the CFO of a major company who speaks fluent transactional and e-commerce adds a kind of financial gravitas. Henry and Bass aren’t investors on a board; they’re experts in managing corporate finance — and doing it in the spotlight of a public company.

Both new directors will join the audit committee chaired by early-in Groupon investor Ted Leonsis. Leonsis also serves on a corporate board that oversees one of the new directors: he joined the AmEx board in 2010 following the credit card giant’s acquisition of Revolution Money. At AmEx, he heads the Innovation and Technology Committee.

As for Mason, I don’t know what it would take to remove him as CEO — or for him to step away voluntarily — but that would be a logical next step if this move doesn’t help the company find more secure financial footing.

The stock dropped 10 percent in late trading to $ 10.71, continuing a sharp downward trend since the restatement. 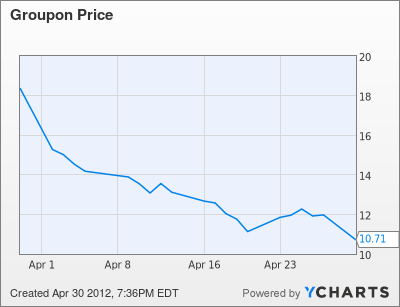 Samsung announces its next Galaxy Unpacked event for August 5

Samsung announces its next Galaxy Unpacked event for August 5